The second field trip of the academic season as part of the ‘Issues and Approaches in Ecology’ module (on the BSc Ecology course at UEA) took us to the destination of Winterton Dunes National Nature Reserve (NNR) to investigate the composition and structure of coastal dune systems and succession, on 12th October 2018. Despite having visited Waxham and Horsey, a couple of miles to the north, I had never previously visited Winterton-on-Sea.

Winterton Dunes are a National Nature Reserve situated on the east coast of Norfolk, circa nine miles to the north of Great Yarmouth, consisting of a substantial dune system. Ecologically, the site exhibits greater similarity to Baltic dune systems as opposed to the dune systems of the North Norfolk coast, the former of which is host to acidic plant communities and the latter has calcareous sand. At Winterton, there are a mosaic of habitats consisting of dune heath, wet ‘slacks’ between sand dunes and dune grassland, transitioning into birch woodland and grazing marsh. 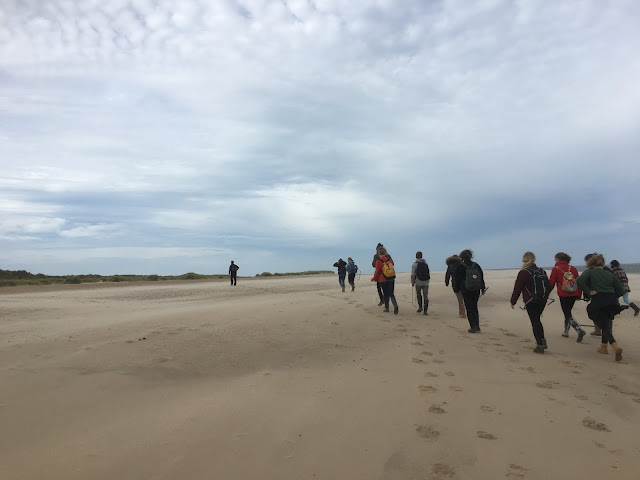 Winterton Dunes NNR are home to an array of avifauna throughout the year, with it being an important site for Little Tern Sternula albifrons to breed with a significant colony established here. It is home to a range of other taxa including scarce, localised and/or protected species including Natterjack Toad Epidalea calamita, Norfolk Hawker Aeshna isoceles and Great Crested Newt Triturus cristatus.

In general, sand dunes are characterised by constant change, increasing in size when sand is deposited on the coast by longshore drift or shoreward sediment movement. Drying between tidal cycles, sand gets windswept landwards and become trapped by plant, forming the initial stages of sand dune systems. The development of the dunes is determined by mineral input (from sand) and the vegetation.

The youngest dunes, closest to the shore, are known as embryo dunes; an inhospitable environment for plant growth due to the salinity, lack of decaying organic matter (humus) and alkaline pH of 8-9, the latter being a result of shell fragments in the sand. In addition to this, Winterton Dunes NNR are a difficult environment for plant growth due to the dry environmental conditions, fast drainage and exposed conditions. The first pioneer plants which colonise the foredunes are marram grass Ammophila spp., Sea Couch Grass Agropyron pungens and Lyme Grass Leymus arenarius – drought-resistant species which can endure submersion by sand. As these plants grow through the sand, they consequently trap more sand, resulting in the dunes increasing in height.

Moving inland from the embryo dunes, a greater diversity of plant species occur as conditions increase in favourability. Humus accumulates as plants perish, trapping water and nutrients, pH decreases becoming more acidic due to more shelter and less sea-spray.
Grey dunes, situated around 50-100 metres from the sea, are considerably more stable in comparison to dunes close to the sea and vegetation cover car reach 100% in these dunes, with mosses and lichens occupying the remaining space between plants, with marram grass decreasing in frequency, small shrubs starting to occur and soil staring to form.


The most mature dunes occur a few hundred metres from the shore, which develop soil if left undisturbed, supporting shrubs and trees such as birch Betula spp., Ash Fraxinus excelsior and Hawthorn Crataegus monogyna.

Dune systems are fragile and are sensitive to small quantities of change or damage, and walking by humans (in increasingly large numbers at Winterton) creates paths through the vegetation which can soon develop into deep gullies due to wind sweeping the loose sand away. 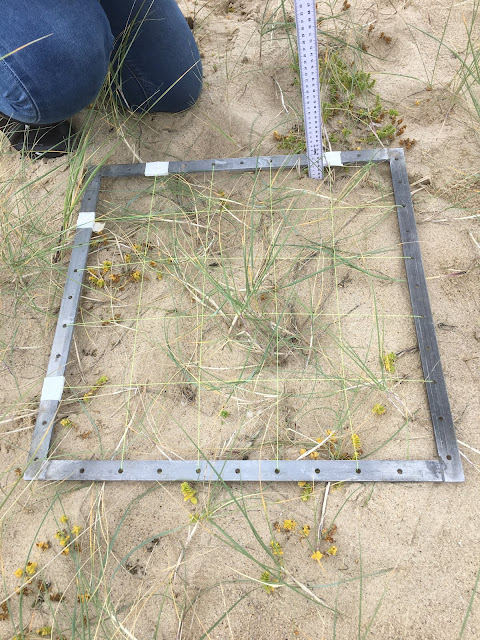 For the first half our afternoon at Winterton Dunes, we worked with 50 cm2 quadrats investigating the changes in plant structure from embryo dunes to mature dunes, recording species richness, bare ground cover (%) and the height of the tallest plant, at 24 points at intervals of 30 metres, starting at the foot of the embryo dunes and finishing 720 metres inland from the shore.

Species richness increased then seemed to decrease slightly further inland whilst bare ground cover decreased quickly with 0% present for most of the latter sampling sites. Plant height varied and the results of all three variables are best demonstrated by the graphs shown above.


For the second portion of the afternoon we assessed the impact of visitors on lichen distribution and abundance in the grey dunes. To achieve this we surveyed three paths using a 50 cm2 quadrat. Each path was surveyed 30 times (10 times in the middle of the path, 10 times on the border of the path and 10 times in the vegetation just off the path). 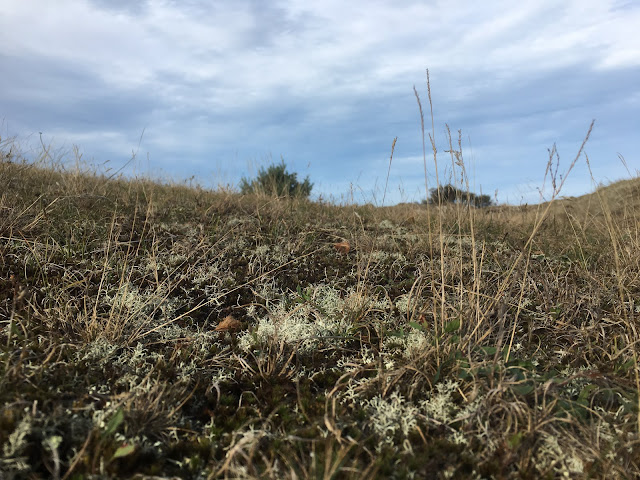 For a more holistic view, and if more time were available, I would extent this study to survey a wider area of the site and take into account the distance from the sea. To reduce the impacts on lichen distribution and abundance I would suggest installing a boardwalk so that human trampling has less of a direct effect on the vegetation and dune system, install a higher quantity of interpretive boards to inform visitors of the importance of staying to paths (therefore not creating new paths) and I would also suggest fencing-off a large portion of the dunes to include the most sensitive areas to disturbance. Surveying was undertaken with care, ensuring that impacts on the sand dunes were minimal. 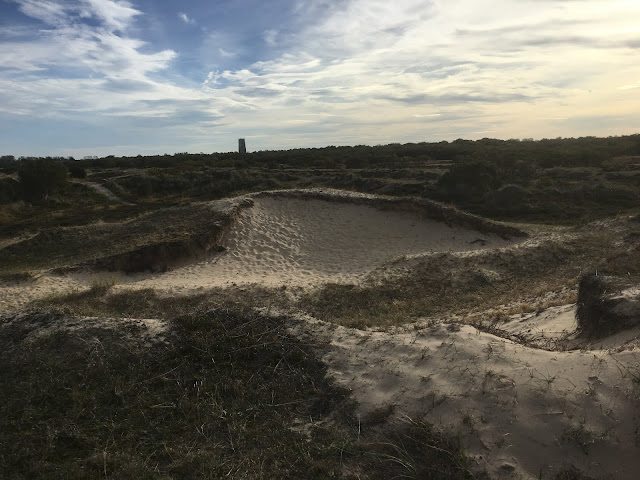 Field trips always provide a great break from ‘classroom’ study and Winterton Dunes NNR is a pleasant site which I shall be visiting again! 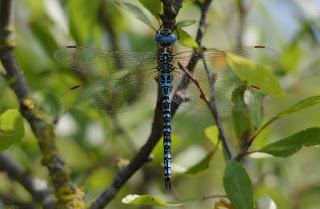 Tuesday 18th July 2017. On Tuesday morning I met up with David D-L on Canvey Island for a session of sound recording followed by some odonata photography. Canvey Point was our first destination for sound recording which produced  3 Yellow Wagtail ,  30 Black-tailed Godwit,  c.320 Oystercatcher,  47 Turnstone,  c.20 Dunlin, 1 Whimbrel, c.40 Curlew ,  6 Little Egret, and  6 Cormorant. Thanks to David for use of the sound recording equipment here! Once the waders started to fly out to the mudflats to feed, we headed to our next port of call, West Canvey Marsh. At least 1 male Southern Migrant Hawker was present here, with good numbers of Ruddy Darter, and a Wall butterfly seen. Male SMH at WCM From here we walked to a section of ditch on the NW part of the island, parallel to Canvey Way, which has recently been identified as a prime location for rare odonata. Within the first 20 metres or so of the ditch, we encountered our first Southern Migrant Hawker of the site. This 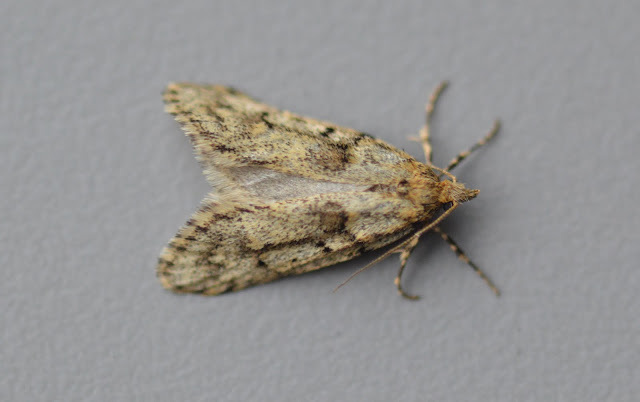 Diurnea fagella Description and Identification Diurnea fagella , sometimes called the March Tubic to use an unconventional English name for a micro-moth species, is a small moth of the Lypusidaeae family. Males are 13-14 mm in length whereas females are 8-11 mm in length (Sterling & Parsons, 2012) . Males have an average wingspan of 2.5 cm, being fully capable of flying well, however females are flightless, having have much shorter and stunted wings. Forewing colour is variable, being pale grey with darker speckling, varying to darker grey and brownish-black (Sterling & Parsons, 2012) . Diurnea fagella , UEA, 28 March 2019 (Max Hellicar) It is a spring species with a single generation, occurring from March to May. Caterpillars feed on a range of deciduous tree species including oaks Quercus spp., Beech Fagus sylvatica , Sweet Chestnut Castanea sativa , Hornbeam Carpinus betulus , Aspen Populus tremula , Hazel Corylus avellana , Blackthorn Prunus spinosa